Back to all posts

How to Play Guitar Solos to Virtually Any Song 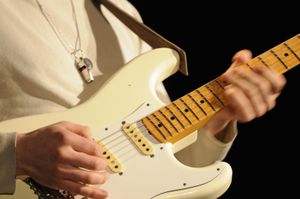 Soloing on guitar is a blast, but when presented with a new song or guitar backing track, how do you know what to play? The purpose of this article is to explain how you can start soloing to just about any song within seconds.

The assumption here is that you have learned to play chords on the guitar and are at least familiar with all of the major and minor chords. Being able to play the major and minor guitar chords will help you understand and identify chord progressions, and will help you figure out the rhythm guitar parts to songs, which is pretty important when it comes to playing lead guitar.

Virtually every blues and rock song has a “home” chord, the chord that defines the overall feel of the song. The home chord is the gravitational center of the song – the chord progression wants to keep bringing you back to the home chord.

One great way to practice identifying the home chord of songs is to put some of our guitar backing tracks on without looking at the track names and try to identify the chord that begins the chord progression. If that chord is A Minor, try noodling around using the A Minor Pentatonic Scale and listen carefully. Is it starting to sound like a guitar solo that fits the song?

If you know the major and minor pentatonic scales, especially the diagonal form of those scales, and you have a good enough ear to pick out the home chord of a tune, you can solo to nearly anything in the rock and blues genres. Of course soloing can get more complicated by adding notes from the blues guitar scale or the major guitar scale, but that will be addressed in other articles. For now, as long as you can identify the home chord and start noodling around in the appropriate pentatonic scale, you will be creating guitar solos before you know it!

Let’s talk about “noodling around” in one of the pentatonic scales. By that, I mean put on a guitar backing track and try simply playing the scale. It will sound like you are doing a scale exercise, but you will hear that what you are playing fits with the song, assuming you correctly identified the home chord and are playing the correct pentatonic scale. The backing track will repeat the chord progression, which is extremely helpful for those wanting to learn guitar, because you’ll get many chances to try creating something to play with that chord progression. Once you are comfortable just playing the scale, try adding a few pauses. Play the first two notes of the scale, pause one beat, then play the next note of the scale, pause, then play the next two notes. Try variations of that, then try playing a note twice, pause, play the next scale note once, etc… There are endless variations, and even just adding a pause or two will suddenly make it start to sound more like a solo than a scale exercise. Keep trying every variation you can think of as the backing track plays. This is how you can begin to become a lead guitarist!