Back to all posts

Performing for the 2018 NYC Marathon

If you invest enough time and effort to maximize your skills playing the guitar or any instrument, not only will you enjoy all the benefits of playing the instrument, you may also have some incredible opportunities come your way.  This happened to me when I was offered the opportunity to play electric guitar for the 2018 New York City Marathon, something that was unthinkable back when I started playing guitar at age 24.  This article describes how that opportunity came to fruition.

Like many musicians, I started playing music in elementary school band class.  My instrument was the drums, which I played all the way through school then again after college.  Playing drums in rock bands after college exposed me to a lot of guitar playing, and eventually I became captivated by the idea of playing guitar.  It didn’t look that hard after all – the guys were just pressing on strings, right?  I bought an acoustic guitar and quickly discovered that playing a guitar a vastly more difficult than it looks.

I spent a few years learning chords on the acoustic guitar and fumbling through some basic songs.  Then while in the car one day, The Sky is Crying by Stevie Ray Vaughn came on and suddenly I was convinced I needed to be able to play like that, specifically his guitar soloing.  Nobody can play guitar exactly like a legend such as SRV, but it gave me a clear goal to work towards.

My attention immediately turned from the acoustic guitar to the electric guitar, where I started learning the fundamentals of guitar soloing, focusing of course on the minor pentatonic scale.  It didn’t take too long for my skills to peak, so I took some lessons from an extremely advanced guitarist who introduced me to other scales, arpeggios, intervals and many other advanced concepts.  Really though, it was blues guitar soloing that I wanted to do at a high level, which requires a ton of practice to learn all the various techniques used to maximize the limited number of notes in the minor pentatonic and blues scales.

I discovered that practicing blues guitar solos is a lot more fun if you’re playing along with music, so I began scouring the web for blues guitar backing tracks.  I was disappointed to find that most of the backing tracks I found were lacking in at least one important aspect.  They were either too short, had a bad drum or keyboard sound, was the wrong tempo, or just weren’t produced to a very high standard of quality.  I decided to start creating my own backing tracks, and they turned out so well I created Best Backing Tracks as a way to share them with other aspiring lead guitarists.

Playing along with my guitar backing tracks had a profound impact on my guitar soloing skills.  I improved rapidly and before too long I was good enough to perform in public.  In 2013 I offered to play guitar for a local 10K race called the Butte to Butte, which has around 4,000 participants.  I picked a spot along the route, set up a PA system, cranked up some backing tracks and played guitar solos along with them for 45 minutes as the runners ran by.  The runners seemed to love it and I had a ton of fun showcasing my new guitar soloing skills.

In 2018, the Butte to Butte performance was so fun and went so well that I thought it sure would be fun to this for other races.  Then I thought why not try to perform for the biggest race in the world?  It turns out that the New York City Marathon is the largest marathon in the world, so I sent them an email with a link to a YouTube video of me playing for the Butte to Butte.  They responded quickly and enthusiastically, and invited me to come perform in 2018!

It took a few days to figure out if I could pull off planning a musical performance from the other end of the country (Oregon), but I quickly realized this was too good of an opportunity to pass up.  I agreed to play and spend the two months prior to the marathon practicing guitar for two hours per day.  I generally practice guitar daily, but not two hours per day!  That extra practice took my guitar playing to a completely new level, which gave me more confidence that I could pull off the biggest gig of my life.

On November 2nd 2018, I traveled to New York with my cousin who came along to take photos, videos and to help keep the event running smoothly.  I rented all the gear from SoundHouse in NYC and once they showed up, set up the gear and did the sound check, I relaxed a bit and focused on playing my best.  The race started and since I was at mile 12, it took a bit for the first runners to reach me.  The first runners to go by were the professionals, who were running so fast I’m not sure they heard me play.  After about 15 minutes, the masses started running by, and that’s when I realized I was playing for an incredibly massive audience.

It’s hard to imagine 50,000 people running by in front of you over the span of 3.5 hours, but that’s what happened and I did my best to give them something good to listen to as they ran by.  I had planned to take breaks, but I was having so much fun and there were so many runners coming that I just couldn’t stop.  I ended up playing guitar solos non-stop for the entire 3.5 hours!  There was a lot of positive energy coming from the runners, which inspired me to keep playing to the best of my ability.

When my allotted playing time finally ended, I was in a bit of shock that this huge event I had been planning for over two months was completed, and it had turned out so well.  To see the highlight video on YouTube just click here. 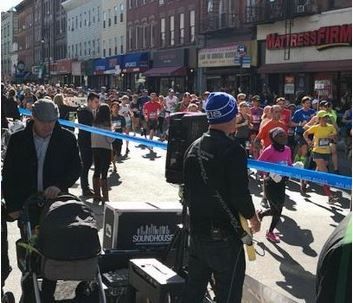